Delayed Musings on A Room of One's Own 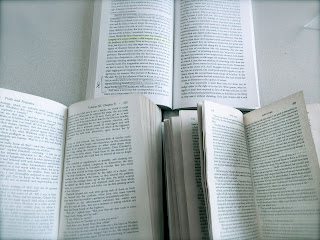 Is Virginia Woolf suggesting that Jane Eyre and Pride and Prejudice are novels of lower quality because of the circumstances in which they were written?

Strangely enough A Room of One's Own has educated and altered my recently newfound love for Virginia Woolf and my absolute reverence for her writing. If in fact, the answer to the question above is yes, then I cannot possibly withhold judgement that Woolf fails to mention the circumstances under which she was able to become the novelist, critic, and thinker she was. Virginia Woolf poses this question: "But how would all this be affected by the sex of the novelist, I wondered, looking at Jane Eyre and the others. Would the fact of her sex in any way interfere with the integrity of a woman novelist--that integrity which I take to be the backbone of the writer?" (72)

While I don't doubt that Virginia Woolf was far more well read than myself, nor that she had a far better grasp on 19th century life and art, this particular generalization gives me pause. Was there really a flaw in the center of every novel written by a woman? Was she always being forced (whether she knew it or not) to combat external forces? I understand that the very act of writing as a woman, particularly for a public audience, was an act of defiance, and that it is impossible to deny the effects of circumstances on a writer. However, I find Woolf's analysis of these women's circumstances as myopic. Most writers (yes, even novelists...especially novelists) cannot help but speak to the circumstances in which they are writing, be they personal, global, or otherwise. Which is why, as Virginia Woolf says, in 19th century novels written by women, "We feel the influence of fear in it; just as we constantly feel an acidity which is the result of oppression, a buried suffering smoldering beneath her passion, a rancour which contracts those books, splendid as they are, with a spasm of pain." (72) I want to argue that the same can be said of novels by men, possibly excepting certain classics, that there is always something circumstantial "smoldering beneath" which is inextricable from the art itself. If these novels by women had something lacking, or deficient, how can it be wholly attributed to the circumstances of their oppression, when some of the world's greatest works of art have been arguably the singular positive outcome of oppression? Woolf writes, "And I thought of all the women's novels that lie scattered, like small pock-marked apples in an orchard, about the second-hand book shops of London. It was the flaw in the centre that had rotted them. She had altered her values in deference to the opinions of others." (73) I think she is mistaken. If these books have a central flaw, it cannot be wholly attributed to their circumstances, and it is not because they have altered their values.