Last Thursday I had the privilege of attending a reception/talk/Q&A for Pulitzer prize winning playwright, Lynn Nottage which included the announcement of the winners of this years Reed Family prize. I walked into one of the strangely lit common rooms of McGinley second to find fifteen or so people, a pretty solid selection of cheeses, and about ten bottles of seltzer water (I have come to believe people think there is something sophisticated about seltzer water). I recognized Ms. Nottage right away, both for her hair, her style, and the small group of nervous students and professors gathered around her humble greatness. I haven't read anything of Ms. Nottage's, so I didn't want to introduce myself solely because she is my kind of "celebrity." So I settled in with some cheese, and talked with some of our classmates, and a friend I knew better freshman year.

The reception was slightly unsettling (for my stomach and my social nerves), and I was deeply confused by the 800 chair speech setup next door, particularly when someone announced we would be walking over to Keating in a few minutes. Fast forward slightly, and I found my boyfriend (his Food and Globalization professor was giving out extra credit points for attendance), and took my seat in Keating third. After a few lovely introductions from members of the English department, three young women got up to do a dramatic reading for "Ruined." It was brilliant. The nailed every line, every accent, and I was stunned that they could possible stop at just one scene. I am truly sorry to have missed the Lincoln Center performance. Ms. Nottage took the podium at the end of the resounding applause for the actor, and the start of her own personal ovation. She proceeded immediately to tell her story with such humility, grace, presence, familiarity, and poise that I was captivated. This reception wasn't tailored to students like me who were completely unfamiliar with Ms. Nottage's work, however, minutes into the story of how she came to write 'Ruined' I was an unsuspecting fan club inductee. 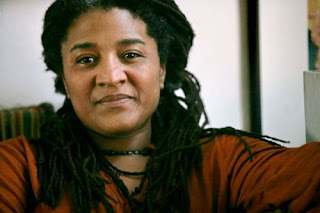 She spoke of wanting this play to create a "three dimensional" piece of art with the possibility of inspiring a visceral response which might provoke some of its viewers to take action. And they did, after one of the first shows in Chicago, Ms. Nottage was approached by a woman who had collected (with her coworkers) $20,000.00 to be put to the best possible use for women in the Congo. Ms. Nottage loosely closed Brecht's famous lines about how artists must keep their eyes open when everyone else's are shut, and it was deeply evident Ms. Nottage had taken that idea to heart. I was somewhat familiar with the systematic use of rape as a weapon in wartime, but knowing and seeing (or at least seeing a representation) are two entirely different scenes. I am extremely grateful to Ms. Nottage for giving a face to these women who suffer terribly atrocities in a war they did not start. There is so much more to say about how Ms. Nottage moved me, but I'll finish by saying if this short reception, and quick question and answer period could evoke such a response in me, I believe it is mine, and everyone else's responsibility to see "Ruined" and face the response I know will shake its audience to the core.