Omg the blog. The empty boxes of the checklist for this semester dwindles and yet there is still a window I have yet to close, an obligation I have yet to accept: this blog. Suddenly caught in the panic and desperation that rises gradually yet quick like a tide at the end of the semester, I continued to scroll down my Tumblr dashboard on my iPhone. I was about to say Tumblr may be the most infamous of all social networking sites but I hold my tongue. Can I really think of any social networking site with a decent reputation? No. But anyway…Tumblr, from what I have gathered from other networking cites,   has mutated into a strange organism. I know that for me personally, Tumblr hosts the things I would never say on Facebook. I don't want people that I know to know that I think these things or like these things or feel this way and so I submit those things to Tumblr where my anonymity is a cloak beneath which I can move and speak freely. Tumblr to me, and to many, is like a diary or a log I keep to mark my progression through interests, thoughts, ideals, and selfies. This made me think: who is Woolf to Tumblr? I searched through the Virginia Woolf tag on Tumblr as a means to find what it is in Woolf's works that resonates with her readers today. Sure, one could argue I hear that every Tuesday and Friday in class yet, I argue that Tumblr offers me a completely different perspective. Whether we like Woolf or not, as students, we are obligated to discuss her and to admire her at a distance. As this is no longer kindergarden, we are no longer asked what our favorite passages or lines are or if we feel as though we can relate with this or that character. We admire Woolf for her technicalities; we admire her for the discussion her writings spark; and yet what we truly admire--the lines that stuck in our minds, the mirrors Woolf disguised as characters--remains silent. But that is in the classroom. Thankfully we're not in the classroom all the time. I found Tumblr to be an opportunity to peer into the hearts of Woolf's readers and to observe Woolf from a different perspective. Of course I know the moments in Woolf's works that struck me, but what about my peers? What sample of Woolf's thoughts did they store in their log as an example with which to define themselves?

I could go into a sappy discussion about how beautiful it was to see so many different people of different backgrounds identify with Woolf and spread her work--and it truly is remarkable how far her voice resonates as I saw her text translated into Russian, Polish, Spanish, and other languages I can not even identify--but as I was scrolling down, reminiscing through various quotes about the wonderful books we read this semester--the most popular source most likely being Mrs. Dalloway--I have to say I grew a bit impatient. To me, it seemed as though they cared for her as they cared for flowers. They enjoyed her when she was beautiful (for example I saw plenty of posts of the young, beautiful Woolf) and cast her aside once her writing became difficult. A Room of One's Own is criticized for its difficulty and lack of clarity (although her main thesis is right there in the title) and they throw laurels upon her head for her mental illness and her childhood trauma. Of course there is nothing wrong with applauding Woolf for overcoming these incredibly difficult obstacles and yes she should be applauded for succeeding despite the burdens she could not control, but to define her work on these tragedies alone is to handicap her achievements and genius. Aren't her books examples of the complexities of human beings, proof that one thing does not define a person?

Yet, not everything was terrible. I really enjoyed the original artwork posted inspired by Woolf. This was one of my favorites: 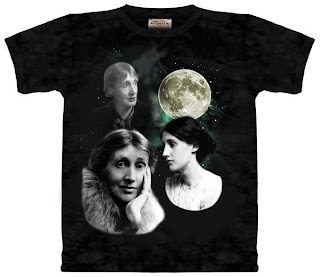